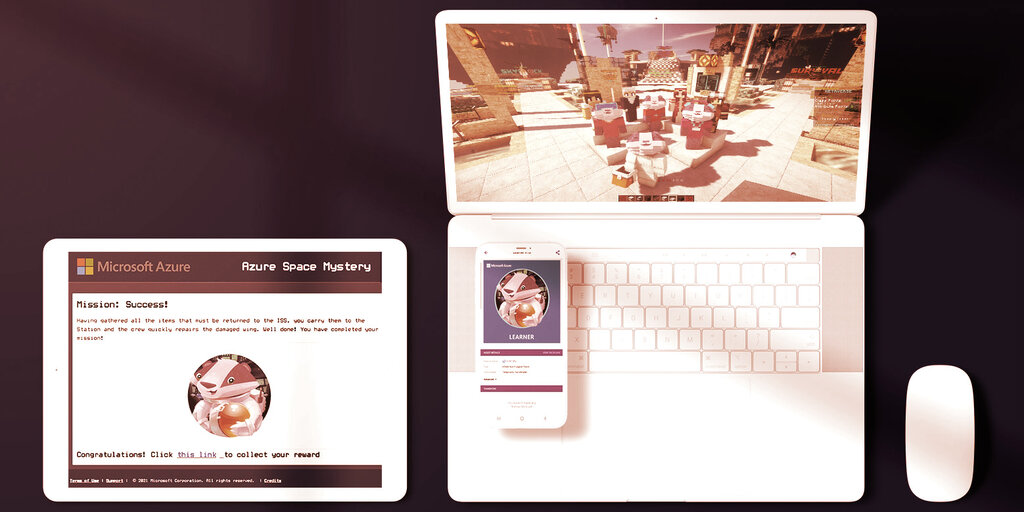 Minecraft is one of the most popular games on the planet, still growing and enrapturing some 131 million monthly players as of October. While the multiplatform game itself is not built on blockchain technology, crypto gaming firm Enjin introduced non-fungible tokens (NFTs) to Minecraft last year via the launch of an unofficial, open-source plugin, allowing players to pull in NFTs as usable items on supported servers.

Now Minecraft publisher Microsoft is getting in on the action with a new collaboration with Enjin to mark International Day of Women and Girls in Science. It’s actually an extension of the companies’ existing partnership for Microsoft’s Azure Heroes inclusive leadership training program, but it’s the first to include a playable Minecraft component.

From today through March 11, anyone can go to Microsoft’s website to play Azure Space Mystery, an interactive fiction web game that challenges players to save the International Space Station. The game features notable European scientists such as Caroline Herschel, Mary Somerville, Hypatia, and Raymonde de Laroche.

Anyone who finishes the game will receive an Enjin Beam QR code, which can be scanned with the app to claim a limited edition Azure Heroes NFT featuring exclusive artwork. There is an infinite supply of tokens for the event, however they will never be available again following this promotion.

These NFTs have additional functionality, however: by logging into the MyMetaverse server in Minecraft and pairing your Enjin wallet, you’ll be able to access a playable sequel quest within Minecraft. Furthermore, completing that second quest will unlock even more collectibles, such as “XX & XY Certified Equal,” which is a “tokenized certificate that encourages equality of the chromosomes and all genders.”

Complete instructions on how to participate in the event can be found via Enjin’s blog. According to Microsoft, more than 32,000 NFT badges have been created to date in the Azure Heroes program prior to the launch of this event. The design of some badges—which feature cartoonish badgers—can be customized within the Enjin Wallet app, and some can even be redeemed for physical rewards.

Biggest Ever NFT Sale Made as ‘Axie Land’ Goes for $1.5 Million

While Microsoft’s interest in NFTs seems purely focused on education and encouragement, the wider NFT market has recently seen an immense surge in interest from collectors. In-game content for blockchain-based games and original crypto artwork have been some of the biggest movers.

For example, Dapper Labs’ officially-licensed NBA Top Shot collectibles experience sold some $2.6 million worth of NFTs earlier this week in just 30 minutes, while crypto game Axie Infinity recently sold an in-game set of land plots for a record $1.5 million. Earlier this month, about $9 million worth of Ethereum-based “Hashmasks” artwork was sold.

previousReddit Post Reporting Tesla’s Bitcoin Purchase From a Month Ago Was a Hoax
nextBitcoin Rockets to Just Shy of $50,000 as More Whales Step In